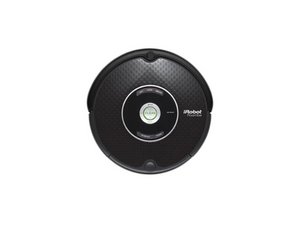 no power after fully charged & work for 4minutes then stop

after fully charged for days , the green light is on. then working good only for less than 5 minutes . the power button will turn red.then won't work till I recharged again.

It is my gut feeling that you have some battery problems here. Go ahead and try this: If your Roomba is indicating a full charge, but it only runs for 15 minutes when you press clean, you need to reset the charging system. You can do this by removing the battery from the robot and unplugging the charger from the wall and robot. Please hold the power button down for 30 seconds. It is to be done with the battery out and the charger disconnected. This will the capacitor circuits of the Roomba. After this, replace the battery and charge the robot If that does not work you might just have to get a new battery. Here are a few sites with more info on this cool instrument...http://www.vaccums-info.com/roomba-batte... and http://www.robotreviews.com/chat/viewtop... and for spare parts if needed http://www.robotshop.com/robot-repair-ce... luck

Hi, I suggest you try to reset your Roomba and if that doesn't work you may need a new battery pack. For full instructions you can visit

You should refer to http://irobotroombareviews.com/how-to-re... to figure out problem. Hope it is helpful for you

It's March 2018 and I'm having a similar problem with my Roomba 655. Of course I'm out of the warranty period. I bought a new $80 battery, but the problem remained--which really irritated me--so it is NOT a battery problem for me.

Things I've done to get this thing working:

--Read lots of blogs, googled and youtubed for answers, but I have found no info to help solve my problem.

--Several times I have simply opened the cover and removed and replaced the battery, which helped temporarily.

--I have held down the SPOT and DOCK buttons simultaneously for 10 seconds in an effort to reset.

--I have done the 30 second "reset the charging system" process (as mentioned in the post above by OldTurkey).

So, before just sending the new battery back and chunking Mr. Roomba in the trash I decided to closely observe my obstinate Roomba 655 while in operation and noticing WHEN it stops. I believe that the battery is losing its connectivity to the battery prongs because it typically stops working and the battery light flashes amber AFTER it bumps the wall, goes over an air vent, or goes on or off a mat or area rug-- although sometimes it does just randomly stop for no apparent reason but I think this is also a loss of battery connectivity. If I simply place the Roomba back on the charging base, sometimes it will just restart normally (it's like it has to remind itself, "oh, we DO have a battery connection").

So, finally I opened up obstinate Roomba and put a buffer between the battery and the bottom cover in an effort to absorb battery movement during operation. (I used a strip of the spongy material that's normally used to keep rugs from sliding around). This has helped my problem IMMENSELY and some days my Roomba will run a complete cycle without stopping and other days it stops and I have to just press the CLEAN button or I have to return it to the base , wait about about a minute (give it time to think :) and press CLEAN . I'm still trying to figure this out and get to the point that the Roomba does not stop mid-cycle, so my next action will be to bend the silver prongs that the battery connects to.

Today I had to restart my roomba twice, but it is now happily cleaning my floors and carpets.

This totally worked for me; although, I did bend the prongs as well. Thanks!

Hi Tamara, I have the same issue. have you resolved yours?

Bent the prongs and that seemed to help for a few uses, but the mid-cycle halt persisted. Decided to spend the $80 for a new battery from iRobot company thinking this was surely the problem, but ... no. Problem persisted. So frustrating! Although it goes against my practices to buy a second product from a company after getting a dud, eventually I gave in and bought a new Roomba because I love NOT having to vac my hard floors. New Roomba is working well.

Thanks Tamara, I was having the same problem. Did all the reset suggestions to no avail. Read your post, grabbed a self - adhesive felt pad made for sticking to furniture legs to prevent scratching the floor, stuck it to the bottom cover above the battery. Worked like a charm. Definitley a connection problem.

Hi I’m Miguel from Spain. That solution from Tamara worked nicely for me. I have have a Romba 770 I don’t use it too mutch, but suddenly the battery started to last only 15 min. I bought a new one and to my surprise the problem remained. I padded the battery pack and now it’s running as it should.

Runs for a short time. Also sings its opening song every couple of hours or so.

Try replacing the crystal oscillator 8 Mhz Crystal on the PCB board i did this with my 2 roombas model 531 and 535 worked like a charm it’s part of the charging circuit on the board! 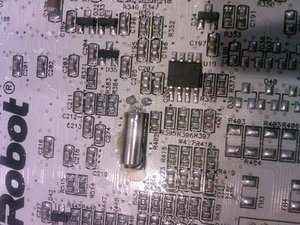 which one exactly you replaced?

The bigger one in the middle?

I have the same problem, after a few years roomba 760 only lasts for 1 minute.

One time I (only ONE time) received an error 5 message: which for 760 version means the wheels are stuck (in a cable or something) which of course wasn’t the case:

I found this webpage: https://techforpassion.blogspot.com/2013...

and drilled holes in the two wheels: (the wheel in front of the three-axe brush is clean as !&&*) ; the other wheel: BINGO: very hard to clean. I pulled out as many hairs as I could.

It still doesn’t run as it should, but I think I am looking in the right direction.

If any suggestions please feel free.

probably better is to replace them. its easy, they are modular, just bought new ones and you can replace them itself

I'm Alain, from France, and having the same problem with my 655 roomba. Only run for approximatively 10mn, and stops and says it had to be power charged.

I've put out the battery and connect it to a car lamp (12V/21W), which lights with high intensity for several hours : so the battery is OK for me... Not for the roomba....

I agree with you when you say it might be a connection problem between battery and roomba. this appear in vibrations, shocks situations.

Maybe we can wire soldered battery/roomba ?

Did anyone have tried this issue ?

Smart, I think I will try to soldering my Roomba 980. Have the same problem there, just bought it. Irobot should use a connector cable instead on the Roomba robots

same issues with my 655. Did reset with DOCK and SPOT buttons, added layer of felt and slightly bent prongs up, replaced battery (not Roomba but generic, bought new dual brushes, replaced filter, checked wheels, all to assure connectivity. It ran fantastic for one full cycle then came ERR 1 and it won’t go away. All i can think is that it is the docking station itself.

Mine is the 800 seiries. It also had a short run cycle. It alos did poor cleaning for the5 minutes it ran. I tried all of thetips I found online for a thourough cleaning and battery reset. My cure was that I found lots of hair inside the roller brushes- under the yellow cap on thier axle. This was a big power drain. The yellow cap pulls off and the post that it was attached to pulls off. This allows access to the gunk. I did check the other end of the brush rollers. That side does not seem to come apart, but I was able to see inside and it was clean.