Plan to remove the motherboard after removing the internal frame in my MacMin 3,1 (late 2009) to clean out the filthy box,

Apple says to pull the very thin power cable straight up from the motherboard that connects it to the rear shelf button. What happened to me was the motherboard flat plug BROKE at both pins flush with the logic board. The is nothing to solder to.

Is there a workaround to reconnect the two line cable from the rear power button to the motherboard? I see nothing to solder to on the motherboard with no protruding pin parts as I had hoped to see. 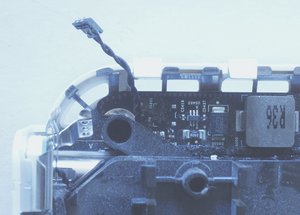 Can you take a picture of the connector and the location on the logic board so we know which connection you damaged.

Here's the IFIXIT guide to remove the logic board if might help you in locating the connection: Mac mini Model A1283 Logic Board Replacement

Its best to just post the images here within a answer. In the menu to the far right is the media eager just click it to add your stuff.

SUCESS! Thanks to both Dan and Minho. I am ashamed to admit that I was way too rough fooling around with the MB. So calmed down and with my 4x loupes re-examined the MB and probed around using a ohmmeter (using the rx1 range using only 1.5v). Here is what I found (see attached picture). The upper trace went to one end of coil L4800. The lower trace went to the large semicircular grounding pad. By soldering 30G wires to these points and connecting them up the OEM power button... the unit powered up just fine.

It's hard to say from your picture. Apple uses a black solder mask which is very low contrast so its hard to see. The connection is probably not that far away.

Clean up the mess with IPA and then put a drop or two on the circuit board. It will act as a lens and you may see (under magnification) where the traces are and where they go. Then it's just a question of making a jumper or extending the wires if necessary.

Good thought, will give it a try! Thanks

Congrats! Modern electronics is not compatible with hurried techs ;>). Things are much more delicate today than they were a few decades ago.

Here's a copy of the IFIXIT guide image of the power button: 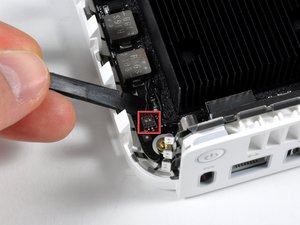 While hard to see here I do believe the two pads just left and right of the wires exit point are the same connections. It's been awhile since I've worked in this series so I could be wrong here.

See if you can solder on a few leads so you can test it out once you have the system re-assembled see if shorting the leads works. If it does you might be able to tack the connector leads to the wires (keeping the connector working).

Good thought. Will give that a try.