Repair information for the 6th generation iPod nano. Released in September of 2010. Model Number: A1366.

My wife's nano (6th gen) appeared to stop working. The screen would not turn on. I thought it was the battery but it actually would still play music. I could start, stop and skip using the headphones. I realized it must be the LCD. I opened the ipod up and immediately saw there was an obvious issue. I attached the picture. In the lower left hand corner there appeared to be a corrosion build up and a possible short. I assume this was from sweat finding it's was in there.

I detached the LCD which also has some build up on it. I took a nyon brush and cleaned the corner of the ipod and logic board. Doesn't look like anything even happened there. But after I attached the new LCD I am still not getting any activity on the screen.

Any ideas? Alcohol bath for the logic board or do you think the element that powers the LCD is fried? 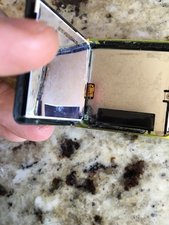 Clean the logic board using 95%+ isopropyl, then try it. If it is still not showing picture, try a new screen. Beyond this, it would be a fault with the logic board (possibly backlight circuit if you can see a dim image), at which point I would deem it as uneconomical to repair due to the cost/time, and would recommend selling this for scrap to get money toward a new one (unless it is something simple like a backlight fuse).

Is the backlight fuse something that can be replaced? I already tried a new screen. I haven't given the board a thorough cleaning with the alcohol just yet. that will happen this weekend.

@gob15 Yes it can be replaced (soldered), but I am not too sure of the exact value, I have only replaced power buttons and screens on this model in the past. I have a feeling schematics are not too easy to find for the Nanos, so it may be best to buy a new one if the clean doesn't resolve it.

After trying an alcohol cleaning still no life on the new LCD. I can hear music though. Just nothing from the LCD. Thanks for the tips. I guess I'll have to look for a used one.