Reparo do iPhone 6 Plus

Is a broken WiFi antenna connected to my phone not charging? 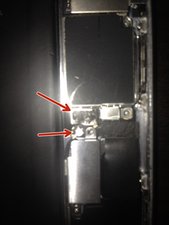 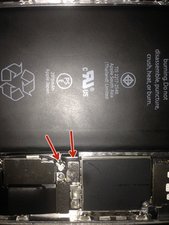 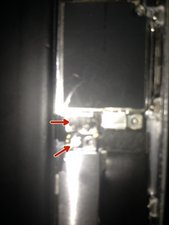 Alright, so about 3-4 days ago, I decided to go looking for answers for the reason why my 6 plus had an unresponsive screen. I found a quick fix with the use of folded electrical tape on the touch ic chips on the back of the logic board. The repair was going great until I accidentally snagged the wifi antenna.

The antenna broke, and I don't have any soldering tools, so I couldn't resolder the antenna. I decided to continue putting everything back together until I receive the replacement one that I ordered. When I turned on the phone, everything except the wifi was working perfectly. I realized that the phone was low on battery, so I decided to put it on the charger. When I plugged it in, it wouldn't charge. I tried different cords, outlets, and adapters. Nothing worked. I thought that it may have been my fix, so I removed it. Still nothing. Now I believe that it may have been connected to the broken antenna. The phone powers on when I plug the cord into it when it's off but doesn't charge when it's on.

Now, I removed the screen from the phone, so I could get back to everything internally. I inspected the battery connector and this other circular connector next to it. I cleaned them with 99% isopropyl alcohol and reconnected them after about 5 min of drying time.

This didn't work either, so I'm out of options of what to do. I noticed that these to connectors to the left of the battery connector are missing the adhesive on the top of them. I will include pictures. Any help with my issue will be appreciated.

Isn't the antenna from charging port the 3G antenna?

I'm not sure. The antenna I broke was nearer the top of the phone. Is it?

That antenna is actually the service antenna but for these purposes it matters not. The broken antenna is not the cause of your no charge condition. I would suggest disconnecting and reseating the charge port connector to the motherboard. If that doesn't work, remove the vibrate motor and speaker from on top of the charge port flex cable and examine the flex cable for tears. I suspect the port is just not properly connected to the board.

Unfortunately, that's not your big problem. Your real issue is that the tape you applied to the touch ICs is not going to fix that issue for long. I'm honestly shocked it worked at all but I can gaurantee your touch function's days are numbered. Think weeks not months. My advice is send it up to iPad rehab in New York. You can google them. Don't trust this repair to the guy down the street who spends his whole day replacing screens. You'll end up with a paperweight for an iPhone.

Which connector would be the charge port connector exactly?

The one that plugs the charging port assembly to the logic board. It's right next to the battery and antenna connector near charger port.