So before I move forward on this "fun" one I'd like to get some input. Long story short iPhone 6 was dropped and now it's in recovery mode.

Literally went through all caps on back side of board for pp_gpu and only ones left are filled right next to apu...which for obvious reasons...Im hesitant to touch unless I've exhausted all other options.

Haven't gone through the 1.8v line yet.

My questions is before going through every cap in the 1.8v line would that possibly be wasting my time since there was multiple shorts in different lines in the board?

1.8v isn't the biggest concern to fix but pp_gpu is what's confusing me.

As I said in my previous answer to your other question, don't worry about PP3V3_ACC.

You will need to determine if the short is coming from the PMIC or downstream. When it comes to PP_CPU, PP_GPU etc, you need to cut the line to properly test (because you can't really remove the CPU, at least not practically).

So for PP_GPU remove L1213 & L1214 and test on either side to see if the short is on GPU side or the PMIC side. If it is on the GPU side, then you need to remove all the caps on that line, one at a time, to see which one is problematic. If none of the caps are shorted, then it could be the GPU. For all intents and purposes, it's game over at that point. Normally the GPU line is about 50-100 Ohms and it will beep on your meter. That is not a short. If it is truly shorted, you will read zero.

Just a note on those inductors...they are difficult to remove without damage as they are made of soft graphite-like material and they are covered in epoxy. Blow hot air at ~200C to soften up the epoxy and pick away at what you can. It will be easier to remove a component that has one side free so that you can properly access L1213/1214. They are also right next to the CPU so proceed with caution.

If the short is on the PMIC side, then you need to replace the PMIC.

This is not an easy repair to troubleshoot and you pretty much have to go all-in or not. If you are doing this for a customer, you need to warn them that the phone may not be repairable or recoverable if you do major damage.

@mdrecovery how did you come to the conclusion that you have a short on PP_GPU? 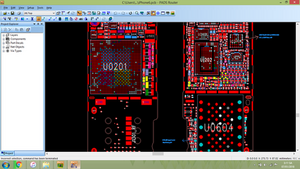