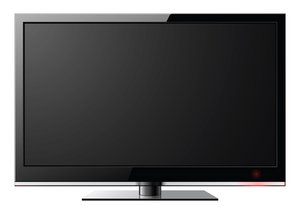 Guides and support for various television (TV) brands and styles.

TV red light blinks 14 times over and over with no picture or sound.

I did a hard reset and cleaned the dust off the boards.....nothing but 14 blinks.

I also unhooked the A board and plugged back in and turned on. Red light just stayes on..... ??

Thank`s for your suggestion, i appreciate that .Took out the A board, and let my colege have a look at it- we`ll see what`s gonna happen.I let You know what`s the result.

@alsf250 start with this information:

14 BLINKS This code is triggered if there are abnormalities during data exchange with the standby CPU ROM. No F15V connected to the A board at plug-in (Open connection of both pins 10 & 11 between P6 and A6) Shorted F15V developed after the TV is up and running. Holding the power switch for over 5 seconds after the unit has gone into shut down and it’s in lock mode with the power LED solid red (Note: the LED stays on if the power button is momentarily pressed). Commonly failed boards are the A- P 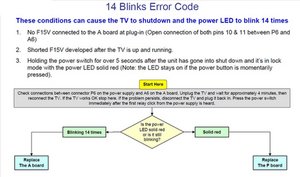 This model also has issues with the SC board " if you have a multimeter , measure the resistance at Vsus lines to the SC and SS and see if dead short. TV off .

If shorted then you'll have to isolate Vsus power to each board (SC , SS) and check at the SC and SS connectors.

Or , remove the Vsus power lead from the SC, turn the TV on, if the front LED starts flashing like it's starting up and then stops with a different SOS code (other than solid or 14 blinks) that would indicate what was just removed was shorted.

If no change, reconnect (check there's no residual voltage present), do same for SS. From here

Could be SC or SS.

Did you ever get this fixed or is the tv junk

I replaced both power and A boards and still have the 14 blinks. And of course I got them on eBay and it’s possible one of those boards I bought is also not good. So I purchased another power board, another 14 blinks. Dang. I paid $1500 for that 85 inch Panasonic 3-D TV was such a beautiful picture. And I still have an after my initial post here, years ago. Still hoping for a fix! Seth

I was working in Sears electronics and I always push the Panasonic plasma TVs as they had the best picture at any angle and the instituneous unlike LED TVs. Then all the sudden I hear Panasonic shut down all their plasma manufacturing plants. Then it occurred to me they knew plasma was on the way out and I think they knew these TVs were going to fail and they did for many people after just a year or so, just outside the one-year warranty. And I hardly used that TV. Special occasion 3-D movies, wanting to preserve a relic that can make it. Seth

I have the same issue with my Panasonic TC-P50ST30: Pressing the power button results in some clicking, as if the TV is turning on, followed by a solid red LED; pressing it again results in 14 LED blinks.

I have replaced the A and P boards, with no change in results. At this point, I’ve sunk more money into trying to fix it than a new TV, which I just bought. I hate to just throw it out, which is unfortunate, but this TV is going to the landfill this weekend; I’m just not going to keep throwing money at a 10-year-old “smart” TV, which pretty much all of the streaming providers have abandoned in the past year anyway, so I can’t even stream Netflix or Prime Video on it anymore.

Thanks for a reply.

Still haven't had chance to troubleshoot my 42. Using a spare Panny 42 LED in meantime which has noticbly poorer pic quality.

Curious if your boards were checked for continuity b4 replacement.

Not ready to give up on my set yet. A 48" LG OLED replacement is close to $1500. A 55" is cheaper than a 48 but too big for my master bedroom. Crazy. Stream anything using NVidia Shield. Any other input appreciated.

Please don't dump TV in regular trash or on side of road like they do around here! Best Buy should take and recycle for free if dropped off.

@oldturkey03 Thanks for the suggestion above on testing the SC board. I did have a short on that board. Zero resistance when connecting the multimeter to the Vsus power terminal after disconnecting. I'm not technical enough to determine where on the board the issue is but replaced it with one from Ebay (a little difficult to find the exact one I needed) and I'm back in business! Had you not suggested that, I would have tried the A or P board which both still work. I originally had 14 blinks. 7 blinks when I took the SC board out which gave me more confidence that it was the issue. Really appreciate this forum. You may not remember, but you helped me years ago when the A board went out. Still using this TV. Would be nice to buy a newer one but plenty happy to keep this one going. Thanks again!

jeetu solanki "Commonly failed boards are the A- P" follow the flow chart P for Power :-)

I think you have it correct, but what flowchart are you speaking of? Do you have it handy? I’m still trying to fix my repeating 14 blinking ST-30 55 inch Panasonic plasma. I was head of electronics department at a Sears and sold so many of those, as I really felt it was one of the Best Buys at The time, 2011 - 2012 or so. I was so shocked a few years later to hear that Panasonic shut down its main plant, I Believe in the United States, but maybe it was Japan. And really shocked that everyone phased out plaza mall together. We all know why now, but then although there was a bit of heat coming off the front of the TV, I mentioned to people that LCD TVs put the heat from the back because of backlighting, And not the front. But I still think his son awesome picture from that particular series. I’m surprised all the bars are so usually available on eBay still. I guess there’s a lot of people with similar problems that really want to keep that piece of equipment going.

Did u ever get ur tv fixed

That seems to be the consensus of various places I looked, so I purchased a power board and replaced it; but no change. 14 repeating blinks. Then I got to looking around even more online, and Several forums that technicians frequented, could be one of three boards Most likely the power board, then the A board and then one of the other boards, the long thin board on the left-hand side, looking at it from the back. The board that has all the connections is the next most likely bad board which I recently procured on eBay. I’ll be replacing that soon and I’ll get back with the results . Seems to be a common problem with this really popular plasma TV back in 2011, the Panasonic ST 30 series. I remember being so amazed by the picture quality and the 3-D Version of avatar Blu-ray that came with it. The fellow that spent 11 years that I seem to recall it was their primary person involved in Developing that 3-D movie wouldn’t allow the 3-D version to be viewed on any other 3-D TV except the ST 30 series and above. For several years you could not buy the 3-D version commercially, only the 2-D version . I was in sales in the electronics department at the Sears at the time and always thought that was a peculiar deal that’s it could be set up that way.

Did you fixed it Seth? I have one with the same 14 blinks.

Hi, I just replaced the A board, but still get 14 blinks. Was wondering if it was the power board that is the problem? Did you ever get this fixed?

No. The ST30 Panasonic plasma are you still sitting there. Like other folks here don’t want to sink any more money into it although it has such an incredible picture and they were expensive the Panasonic 3-D TVs, $1600 for 55 inch.

I replaced the A board, the power board, then replace the B board, the one with all the connections. It’s still 14 blinking lights repeating.

The next board would be the buffer board but I don’t have the correct meter to run across all the connections to nowhere and to confirm the board is bad. There are two different boards and have not replaced them. It’s still sitting in the back bedroom as I hate to get rid of it but I’ve already put in a lot of money replacing those two boards so I might try it with buffer board or go to our place nearby that might do it and fix it cheaply. It’s possible that the E board or be bored I received a replacement is also bad, so, not sure what to do now.

Don’t have an answer. After 9 + years, my Panasonic TC-P42S30 shut off and put itself into SOS mode almost immediately after turning on. This happened with the set ‘cold’ as it was the first use of the day. Initially, the power LED was blinking 5 times and I tried to do a reset using different techniques I found online. None of those worked. I unplugged it again from power and waited a few hours. When trying to start it up again, the LED begain blinking 14 times. That’s where I’m at now AL V.

I have more details if interested in pulling board, shipping out and reinstalling. If not, Best Buy recycles for free.

I'm interested in giving it a shot if you can provide details. I have replaced the power board in the past which bought another 4 years or so, so I'd like to see how much longer I can drag this TV along :)