So my son says he was using his laptop and out of a sudden was prompted to restart/shut down/etc. Eventually the computer shut down on its own and since then has not passed from the apple progress power up screen.

Please refer to this video:

Already tried with no success or change in behaviour:

In all case, I'm always getting the same behaviour.

I believe the issue may be shorted power button (also, considering my son says the problem began when he was randomly prompted to shut down the computer. That said, what I find odd is that the computer completed the onboard diagnostic utility without shutting down and it responds when pressing the power button to turn it on.

Thank you again for your input.

My son just "confessed"... there was a part of the story that was missing... he says he was cleaning the keyboard with a Windex-like product and did a squirt or two directly on the keyboard when the problem began.

At this point I'm wondering if replacing the keyboard would fix the issue; I know the power button is connected to it. I'm also wondering if there is an issue with the logic board (but again, booting directly to the diagnostics utility COMMAND + D yielded no hardware errors). I notice that upon booting the computer fan runs at full speed and am also noticing that the magsafe power cable led is always in "green" (never in "orange"). Don't know if these are telling sign of possible logic board damage.

Thanks again for your input.

To isolate out the keyboard & trackpad out you'll need a USB keyboard & mouse.

Now place the system on it side so you can still plug in the MagSafe, keyboard & mouse. You'll need access to the bottom as you'll now use a jumper to short across the power pads. Here's a figure to help you finding them. 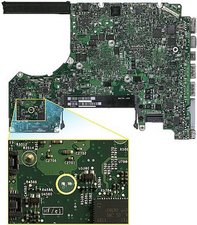 See if the system stays running then. If it does you'll need to try to dry out the keyboard to see if that fixes things. I would put it on a sunny window sill so it gets warm (not hot).

So, before venturing into more complex solutions I decided to leave the computer under the sun for some four hours.

I powered on and lo and behold and booted up like nothing ever happened!

I'm still worried about any residue of the cleaner my son squirted on the keyboard... don't know if I should venture into disassembling the computer.

In the meantime, my teenage son is super happy and relieved...

I would love things alone here. Window cleaner once dried won't be an issue.

Happy it all worked out!

A day after my PROBLEM SOLVED post, son reported that problem returned. Used hair blow dryer to push hot air through the keys. While that fixed the issue (we think), it also melted/warped some of the key covers!! (they all work though)

We are managing to turn on the computer by disconnecting/reconnecting the battery... after doing this, power button *immediately* responds and turns the computer on; once it fully boots up, button stops working.

So I'm replacing the keyboard... will report back (in a week or so).