A friend of mine bought a broken 27" imac. It Powers on, chime sounds, backlight Turns on nut no image. So let's open it up shall we?

I was suspecting the radeon 5750 tot be faulty but then I noticed that someone had already been fooling around.

One of the smd component underneath the lvds connector was Ripped of. I guess by removing the gpu. They probably scraped it with the bracket of the videocard. They just jumpered it with a thin wire. Does anyone Know if its a capacitor or a resistor and what value? 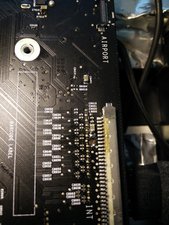 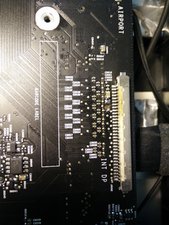 if I look at te sheme, it looks more like an inductor?

I see a reference of 250ohm however, I see no mention of inductance.

@ns_ripper that is reference designator L9000 which is a 250ohm ferrite bead used for EMI control as a filter. It connects to the 12V LCD circuitry. Difficulty is that there are other values listed. Based on previous inductors, I'd go with a 1.4A 250ohm inductor and measure the distance from solder pad to pad to determine the package size. Check Digikey.com for more info.