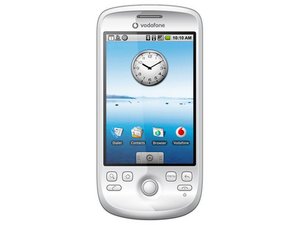 The HTC Magic is a smartphone designed and manufactured by HTC.

How can I replace my htc magic cover?

i want to purchase an OEM cover off ebay because the one i have now is cracked. can you help me with instructions on how to replace it?

As in the front panel?

thanks for all the feedback guys! very helpful

If you want to replace the front panel you need to take apart almost the entire phone. Most of it can be done with a Torx T5 and T6 screwdriver and following logic. At the moment I can't make a guide for you since my phone got stolen today.. :(

The front cover is very easy, just go to the device page and click on the manual.

Replacing the front cover is easy, but I would absolutely not recommend to replace the body of the Magic. At least not with the housings that are sold on ebay. Reason is: the Bluetooth and GPS antennas are glued onto the body / middle part of the housing. You can see them as two stickers, one on the left and one the right side of the camera glass. Now, if you replace the body, BT and GPS won't work, because 99.9% of the housings sold on ebay don't contain these antennas and it's to risky to remove them from the original body.

You have three choices:

1. Get an original housing (don't ask me where because I don't know) and try to replace it.

2. Only replace the front case, which is a pretty easy operation. Just don't buy the housings with only the HTC logos, because they are built very bad:

- the vibrating motor will be stuck due to case design fail

3. Try to make your own antennas. Someone did it and made a how-to:

He claims it's easy but I found it pretty hard and frustrating. It took me some hours but in the end it didn't even work and i ended up replacing only the front case.

Yeah... for sure magic housing has it radio radio antennas stick on it but with a little patience you can remove them and stick it back.

Beware of the screws. I needed to remove the metal fittings and replace them with the old ones. Very hard to do.

Remove the tape around the screen hole if you want the LCD to be at the same level with the case.

Use the old keys and paint the case black from inside if don't want to see the leds through the plastic.

Check the plastic diffuser of the upper leds. You may need to keep the old one if there are not identical.

Be careful with the volume key. It only fits one way and its rubber clips are easy to break.

Don't make any appointments for the next two or three hours. It's time consuming procedure.

All above are problems that i manage to fix but these are subject to case manufacture.If you are lucky you might not meet any of those.

I think there are 2 or 3 (except the original) different qualities.

Mine was HT-03A. Probably the worst.